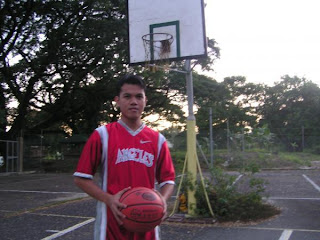 I do played as a shooting guard. My best offense is catch and shoot cos I'm a pure shooter. In the Street ball we managed to won the game by my two consecutive same spot baby hook shoots against a taller, older and more experience than me. My teammate Teddy was so happy. After that there are lots of games in my early teenage years lots of disappointment in my favorite sports. Lots of kids are so strong inside and good slashers really Filipino style of games. My first team Lourdes Knight a long time team in our barangay (village). Finished runner up in the midget division. I played one minute and zero point in the crunch time we won by four point in the physical game one. Game 2 and 3 took by the opponent to took the beautiful trophy (PBA) style trophy. We loss by big margin because of so many tactics in the game. And the runner up trophy is a traditional trophy they called it the sardine can. It's fun! Its a learning experince.
Posted by Bradpetehoops at 2:08 PM

I think You are love the sport so much. It is a good way to do the exercise. But can't play sport, maybe I don't want to but I'll try to play.

Vuthy of Cambodia and Artesanato of Brazil thank for you comments.