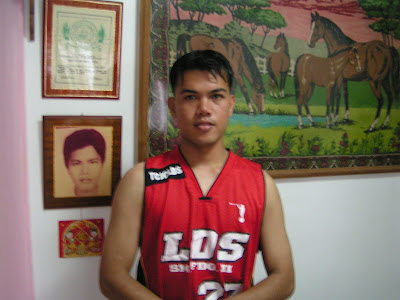 Walter Peter is an honest basketball player, not rude in the basketball arena cos he is good and meek. God gave him unbelievable moves, shots and jaw drop amazing things in the hard court. Shooting long distances 25ft, mid court up to free throw line of the other end of the court, 3 pointer hook shots. Lay ups and jump shot behind the board people saw unbelievable things. Shooting free threw close eyes and no look backward. No look backward 3 points swishing through the net many times. Bounce shot, lay up from free throw, lay up from point line and lay-up from mid court the bowling swishing shot. The amazing one is mid court backward no look bounce from the free throw to good bounces to the hoop. 53 feet throw bounce and swish shot, mid-court scoop lay up shot.  Yeah! One of the unbelievable coast to coast dribbling jump from the three point territory then looking for drop pass but none of my teammates is there only the defenses of opponents in space of time like I pose in the mid-air and thinking before I was landed I throw the ball cos I heard in small voice saying "Shoot it!" I landed and the ball goes directly to the hoop. My teammates said, "How did you do that? Unbelievable and they laughing giving high five and the opposing team jaws down and some shake there heads. Incredible pump shot vs all opposing players. Doing awesome high arcing 20-25ft tear drop shots everyone are laughing and smiling about those shots. Heavily defended in three point even I was covered by two giants I did a high arcing shot swishing trey. Mid court base ball shot hit the rim strongly bounce up high and goes down to the hoop. The 360 degree lay up high bank shot. The no look double crosser reverse shot over good looking guy named Morton. Yeah! Unbelievable shot in the league. The crowd are shouting and jumping. Streetball History-The street ball tomahawk dunk turning point of the game. 10 blocks, 14 assists (Streetball high) , 10 steals, 40 rebounds and 66 points in street ball game (Quintuple Double). Quadruple Double -85 points (Street ball high), 45 rebounds (Streetball high), 14 blocks (Streetball high), & 11 steals (Streetball high). First Triple Double - 60 points, 29 rebounds & 11 assists. All game winning shot 14. In big and top league, game high is 19 points. Playoffs Semifinals high 11 points, Championship best is 13 points in estimated 15-20 minutes. Championship game low is 2 points. Best league average 11 points per game. Became playing coach cos our strongest 5 players moves to more prestige league I average 17 points per game. Played 40 full minutes 7 times. Longest game double over time in a championship game loss by a point, my last championship appearance and played with injured shoulder. Most number of 3 points is 4 all swishing (nothing but net "swak" 1-meter beyond the rainbow territory toughest secret weapon against zone defense, the breakaway of the game). Hit 47 points in a Basketball Marathon (like All-Star game all best players are there with average players of different teams), a pre-season game high 37 points, GS best with Koreans 19 field goals (95%) of total team points & the score 20-19. Scoring machine in Streetballs games. Full court Friendship games high 34 points (including the game winning fast-break lay up) and the low is 20. Koreans dubbed me as the "Basketball god".


Other Sports Awards and Achievements:


Posted by Bradpetehoops at 9:41 PM

hope you're not bored reading mine....

Thank you so much for your nice cmment on my blog! I really like yours, as well. I'm a basketball player, too!

you should totally post some videos of you playing basketball!

Fashion moment your blog is so cute!

Adela is a lovely model!

Donita, our loyal friend from Poland.

Your so good in basketball. I wish I will do that also.

thank you for your sweet comment. it sounds like you are a great ball player!
x
www.tittees.blogspot.com

Anonymous thanks! Rain thank you so much for the comment.

Ash Fox I express my gratitude! Your a great blogger and stylist!

Donita Bonita thank you so much! To Poland -Greeting from Pinoy tayo!

I love basketball too.....but my love is only for the Miami Heat! You are a basketball fanatic LOL! but that is all good!!!

thank you for the comment! i was never good at basketball... haha. i remember i shot a 3 pointer ONCE and people were amazed. haha

Nazarina A thanks a lot. Have a nice day. Your so cute!

Thanks for the comment, good luck with your basketball career :)

Adela thanks again and for the award. Have a nice day to everybody.

So you play a great ball game and your handsome too?!?! Some guys have all the luck :-))

Hello
Thanks!
A great day to you too!
ÉRICA SENA/ pensareco

Mkreider thanks for the wonderful compliment.

Erica thank you very much.

Thanks Dorin! Have a wonderful day.