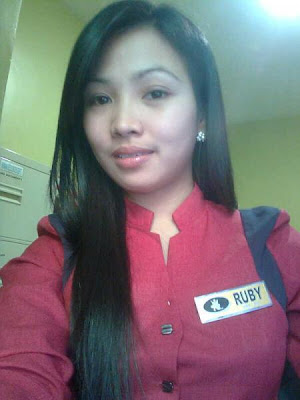 Ruby is one of the gorgeous basketball player in the world like World Famous Sue Bird and Ruth Riley-USA, Lauren Jackson-Australia, most beautiful Elina Babkina of Latvia, Sui Feifei -China. While in Japanese cartoon anime is Aruko the cute girl in Slamdunk. And in Japanese drama series One Liter of Tears main character Erica Sawajiri as Aya Ikeuchi played the real true to like role of Aya Kito. Aya Kitō proved her courage and positive attitude towards an uncertain future when suffering such an illness, spinocerebellar atrophy. Who loves to play basketball.
Now lets go back to Ruby is a cute basketball player, who played with great poise. Good shooting skills. I remember in Angeles Philippines Stake Center basketball game we played pick up street ball game with the local boys down there. Being our team is mix with a pretty girl Ruby who made a shot from top of the key, simply amazing. At college years I heard she also joined basketball to represent their department and I saw the proof that she really played with a big heart in games of basketball in the school. Couple of his brothers played in our team. Monte the eldest brother joined our Champion team Bulaon Nephi Green Archers while her younger brother Odylon played with me and my youngest brother the Kid. Odylon one time he made a best 28 points versus Capaz Saints. Ruby supported her brothers and our team cheering us. We thank her and give her a great recognition as part of our great basketball team.
Posted by Bradpetehoops at 10:36 PM

Yeh, she is pretty. Really Filipina beauty. I wish I play a basketball game with her.

I think she is really beautiful. I wish you to be her boyfriend :-) Hugs from Poland :-)

Thanks for thy wonderful comments. Magdalena thanks a lot. She is a very nice friend to all. And she is so kind. Have a nice day.

Kindly visit my other blogs aswell:

Nora thanks, Anonymous guy and Add Topic. Thanks a lot for thy comments.

she's gorgeous. i wish i had some athletic abilities.

..thank you for your generous comments. made my day!

Ash Fox sounds like Magan Fox of Transformers. Yes, Ruby is so gorgeous and athletism in nature.

Seems you have a mixture of girls and boys on your team! Maybe you two should hook up! You've great admiration for her!

Such great talents. Keep it up.
Ruby is amazing

Hello Bradpetehoops,
I Became Fan Of Your Blog & I Am Also Following Yours...
Thanks for Your Comment, Be In Touch With Pictures And Follow If You Like....

You Done Great Job.. Keep It Up...
I Became Fan Of Your Blog and Following.
Thanks for Your Comment On Pictures , Be In Touch With Pictures and Follow..

Thanks Anonymous pal for commenting sport heroes to cartoon superheroes, and unto Sreenivanu S of India "Namasta" (Thank You!). Your pictures are so impressive.

You are pretty, too.

Hope you get the best Jen.


My Bangkok Through My Eyes!
You Got A Posty
All Little Things I Like
Thailand In Photos

Yes, most of the Philippine people are look like Thai, Vietnamese and Malaysians. Most of the people appreciate her beauty outward and beauty from within.

Yes bro. she has the cutest looking girl :),btw is ruby a real name? If u dont mind just tell me a bit info of her.. Thanks