Oldest Man in the World 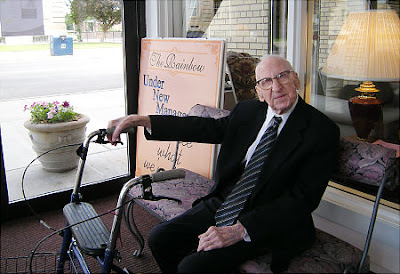 Oldest men in the ancient time recorded in the first book written by Moses in Old Testament which is Genesis. The first man in this world is Adam lived for the space of 930 years. Seth the 3rd son of Adam with his likeness lived 912 years. Abel killed by Cain. Adam has daughters, too but not written in the Bible. Only the most prominent women names like Eve, Ruth, Deborah, Sarah, Rebeca, Leah, Rachel, Esther, Mary (mother of Lord Jesus), Elizabeth (mother of John the Baptist), Anna, Marta, another Mary, Mary Magdalene and among few others are written in the Bible. Generation to generations in the time of the patriarch. Enos - 905 years, Cainan - 910 years, Mahalaleel - 895 years, Jared 962- years, Enoch - 430 years stayed in the Earth. He was so righteous and all the people of City of Zion. They never taste death and God took the entire city to Heaven. Methuselah (known as the oldest man ever)- 969 years, Lamech - 777 years. Noah 950 years. Notable great flood in his time 40 day & 40 nights raining. And spent 150 days with 7 others in the ark. Along with the pairs of each species animals & seeds, plants etc. Shem one of three Noah's sons lived 610 years. Shem the bloodline of the Bible characters and generation of times. After the flood the longevity of average 900 years down to 400 years, then 175 years. Arphaxad - 438 years, Salah - 433 years, Eber - 464 years, Peleg - 239 years, Reu - 239 years, Serug - 230 years, Nahor - 148 years, Terah (Abraham's father) - 205 years and Abraham lived 175 years. In time of Moses, some people are supercentenarians which lives 110 years or more. Moses himself reached 120 years old died and translated in Mt. Nebo while taking a glanced to the promised land of milk and honey the Land of Israel. No one reach one day in the God's time which equivalent to 1,000 years. see 2 Peter 3:8.
In modern time, the undisputed oldest man verified was Christian Mortensen (Danish-American) born 16 August 1892 and died 25 April 1998, 115 years, 252 days. Oldest verified person/woman was Jeanne Calment (French) 122 years, 164 days. Oldest living man is Walter Breuning (American) at 113 follow by Jiroemon Kimura (Japanese) at 112. Oldest living woman is Kama Chinen (Japanese) at 114 years old. World oldest man died at the age of 138 named Habib Miyan of India recognized by Limca Book of World Record but Guinness Book of World record not because is not verified or being disputed. In Philippines, I met a man in the remote place of Buhi, Camarines Sur dated back 1996. Or in the other side of the Philippine famous home of the smallest commercial fish in the world the Sinarapan in Lake Buhi, also known Philippines' cleanest lake. The man aged 107 years old eating only fish, few rice, some crops, lots of vegetables and fruits. The environment is so clean pollution free of any type. If he still alive today, he is at 120. But some of the problem is that some of the Filipino centenarians who lived since 19th century have no documents due to war, fire, floods other natural disasters or calamities.
*Above photo : The photo of Walter Breuning the oldest living man.
courtesy of Yahoo.
Posted by Bradpetehoops at 9:54 PM

Wow! Nice information, I read about the story of industrious senior citizen doing great works in their old forms. The oldest is Grandma Moses at 100, doing painting.