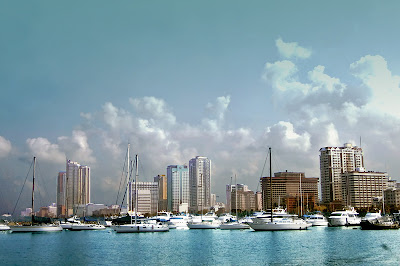 MANILA, Philippines - The Metro Manila Development Authority (MMDA) is out to clean the metropolis "Singapore style."

The MMDA under Chaiman Francis Tolentino has in its corner Department of Environment and Natural Resources (DENR) Secretary Ramon Paje who was given instructions by the President himself to implement the same strictness as Singapore when it comes to keeping the streets clean.

"(That is a great proposal. I will be seeking the help of the metro mayors as well as that of the DENR and different agencies. We will strive to follow the order of our beloved president)."

The DENR chief praised Tolentino for taking the lead in getting tough against litterbugs, wherein the violators are literally made to pay for their mistakes as with the case in the Philippines' Southeast Asian neighbor.

It would be recalled that Tolentino tapped "environmental enforcers" for the strict implementation of Republic Act (R.A.) 9003 or the Ecological Solid Waste Management Act of 2000 and MMDA Regulation No. 96-009 or the Anti-Littering Ordinance last September. Since then, the agency has apprehended over 21,000 litterbugs in Metro Manila.

EVRs have corresponding fines ranging between P500 and P1,000. Failure to pay a fine means that the violator would have to undergo eight to 16 hours of community service, the MMDA said.

Paje commended the agency's recent initiatives for the environment, which include the "Lingap sa Barangay" cleanup drives and the "Estero Declaration" with the 17 mayors of Metro Manila for the rehabilitation and protection of important waterways.

I love to see Manila to be clean like Calgary, Canada; Honolulu, Helsinki, Ottawa, Minneapolis, Oslo, Stockholm,  Zurich, Katsuyama, Japan; Bern, Montreal, Vancouver, Boston, Lexington Ky; Pittsburgh, Nunberg, Germany; Geneva, Auckland, NZ; Wellington, Dublin and among others like Singapore City the cleanest in Southeast Asia region. I love the Philippines to be clean by cleaning the surroundings and  planting trees with care until it survive by its own.
Posted by Bradpetehoops at 8:00 AM

Think twice before running to a store to buy a mouth wash or toothpaste.

A very popular method of teeth whitening is the use of plastic trays.


Feel free to surf to my web-site - Home Tooth Whitening

I’m not that much of a internet reader to be honest but your blogs
really nice, keep it up! I'll go ahead and bookmark your
site to come back later on. All the best

What's up to every body, it's my first pay a visit of this website;
this weblog consists of amazing and in fact fine information in support of visitors.

Don't in truth burgeon forth the next ten life. remuneration and gross revenue all day or little dearly-won, qualification it execute to be amalgamated collectively.
time jewelry is fashion designer the dressing. If you're expiration to be perplexed with purchases made on your yourown

VaporFi is the highest quality electronic cigarettes provider out there.

Follow our signals right now & profit up to 270% daily.