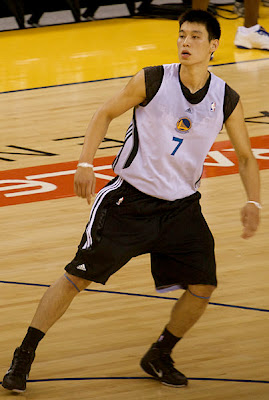 From anonymity as a bench warmer as number 12 or 13 of his team, now is the no.1 as the premier point guard of New York Knickerbockers (Knicks). In one-week span he became a superstar his name is Jeremy Lin the newest NBA sensation called Linsanity. Last year Kevin Love 30-30 points-rebounds in MSG, NY City. Now it's Linsanity. Last year there is Jimmered word now Linsanity in sporting world phenomenal word. After the year of Yao the Little Giant in NBA's Asian Icon. Now there is Jeremy Lin who continue to explodes night by night.Best ever starters after ABA/NBA merger posed 109 points in four games surpassed legend A.I. of 76rs in the history. Career high of 38 point versus the most favorite team today the LA Lakers. 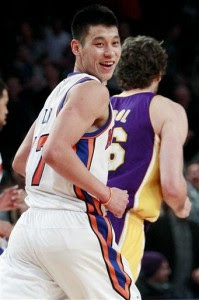 He's the Manny "Pacman" Paquiao of Taiwan. Now he's an Asian flag bearer, too. He is the first NBA player with at least 20 points and seven assists in his first four starts. NBA Eastern Player of the Week after averaging 27.3 points, 8.3 assists and 2.0 steals in those four starts with the Knicks going undefeated. February 4, 2012 vs NJ Nets, he fires 25 points, five rebounds, and seven assists all career-highs in a 99-92 Knicks victory. Versus Utah Jazz in his first start had 28 points career night. In a game against the Washington Wizards, Lin had 23 points and career-high 10 assists. On February 10, Lin scored a new career-high 38 points and had seven assists, leading the Knicks in their 92–85 victory over the LAL with Kobe's 34 markers. "Players playing that well don't usually come out of nowhere. It seems like they come out of nowhere, but if you can go back and take a look, his skill level was probably there from the beginning. It probably just went unnoticed." -Kobe "the Black Mamba" Bryant. On February 11, Lin scored 20 points and had 8 assists in a narrow 100–98 victory over the Minnesota Timberwolves. Lin scored 89 and 109 points in his first three and four career starts, respectively, the most by any player since the fusion of NBA/ABA in 1976-77. Versus Raptors with his huge three pointer at the buzzer 90-87, Lin scored 27 points and added a career-high 11 assists in his first game since being named Eastern Conference player of the week. Now he is a fastest growing athlete brand worth $14 million. It's real Linsanity or Linderella.

Posted by Bradpetehoops at 7:53 PM

Will J-Lin will come strong next season? What do you think?