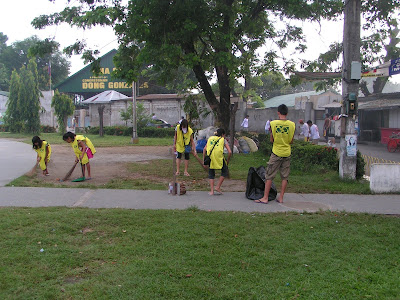 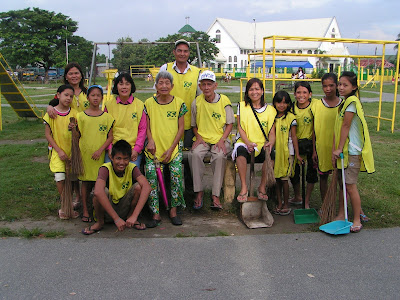 Mormon Helping Hands - program of the Church of JESUS CHRIST of Latter Day Saints (Mormons) around the world. The Mormon Helping Hands program was officially established in 1998, and since then hundreds of thousands of volunteers have donated millions of hours of service to their communities. Although the program is most often associated with emergency response, disaster relief is only half of the story of Mormon Helping Hands.

It started 10 years ago when the Church asked local Church leaders in Argentina, Paraguay, Uruguay and Chile to reach out in their communities through service. South American Church leaders set out to establish an annual day of service.
They coordinated a multinational effort involving tens of thousands of Church members from all over southern South America. Nearly every Latter-day Saint congregation in the region participated. Church members both old and young went out into their communities cleaning streets, parks and other public spaces and painting and repairing schools and hospitals.
Soon afterward, the initiative spread to Brazil, where it has become a cornerstone for national service. The Mormon Helping Hands program in Brazil first garnered national attention for its humanitarian efforts and community projects in 2001 when Marco Maciel, then vice president of Brazil, thanked the Church for its service. By 2002, the Mormon Helping Hands program was named one of the most important volunteer organizations in Brazil.
Perhaps one of the keys to the growth of Mormon Helping Hands is that it is not a program that was pushed. It was allowed to grow at its own pace. As it did, more and more Church members were naturally attracted to the opportunity to stand shoulder-to-shoulder with their fellow Church members and neighbors in activities that benefit everyone.
“As many as 100 million people worldwide may need a wheelchair and don’t have access to one. Only 1 in 100 can afford to purchase a wheelchair. To be mobile, people with disabilities often rely on family and friends to carry them from place to place. It can be extremely difficult just to leave home. Going to school or getting a job may be impossible dreams.”
In 2008, the LDS Church distributed more than 50,000 wheelchairs in 46 countries, including Armenia, Argentina, Belarus, Bolivia, Botswana, Cambodia, Cameroon, Cape Verde, China, Croatia, Democratic Republic of Congo, Dominican Republic, Georgia, Ghana, Guatemala, Guyana, India, Iraq, Jamaica, Japan, Jordan, Kenya, Kyrgyzstan, Laos, Lebanon, Liberia, Malaysia, Mexico, Micronesia, Mongolia, Nepal, Panama, Papua New Guinea, Peru, Philippines, Puerto Rico, Romania, Russia, Sierra Leone, South Africa, Sri Lanka, Thailand, Turkey, United States, Uruguay, and Vietnam.
The LDS Church has also participated in the social mobilization effort that is significant to the success of each campaign. A catchy musical jingle, composed by a young LDS Church member during the LDS Church’s participation in the Madagascar measles campaign, has been translated and sung in 28 languages on dozens of radio stations in subsequent campaigns.
From 2004 to 2008, 59,596 LDS Church members in 32 countries volunteered their efforts in canvassing neighborhoods and helping at vaccination posts.
In 2008, the LDS Church participated in measles vaccination campaigns in Benin, El Salvador, Egypt, Honduras, Ivory Cost, Malawi, Mozambique, Papua New Guinea, and Tanzania.
In April 17, 2010 clean-up drive in Slovenia.
Today in Bulaon Resettlement School Streets & Octagonal Park City of San Fernando, Pampanga in Philippines.
Posted by Bradpetehoops at 7:44 AM

What's up colleagues, its wonderful post about tutoringand entirely defined, keep it up all the time.
Feel free to visit my weblog - Halloween Costume

Marvelous, what a webpage it is! This website presents valuable data to us,
keep it up.
My blog : online business

It's appropriate time to make some plans for the future and it's time to be happy.
I've read this post and if I could I wish to suggest you few interesting things or suggestions. Maybe you could write next articles referring to this article. I desire to read even more things about it!
Feel free to surf my homepage : small business marketing

I will right away take hold of your rss as I can not
in finding your email subscription link or newsletter service.
Do you have any? Please allow me realize in order that I may subscribe.
Thanks.
my page - perfumes baratos

What's up to every body, it's my first go to see of this blog; this weblog consists of remarkable and really
excellent material designed for readers.

I seldom leave remarks, but i did a few searching and wound up here "Mormon Helping Hands".
And I actually do have 2 questions for you if you don't mind. Is it just me or does it appear like a few of the comments come across as if they are written by brain dead folks? :-P And, if you are posting on other online sites, I would like to follow anything new you have to post. Could you make a list of the complete urls of all your community sites like your twitter feed, Facebook page or linkedin profile?

Wow that was odd. I just wrote an extremely long
comment but after I clicked submit my comment didn't appear. Grrrr... well I'm not writing all that
over again. Anyway, just wanted to say fantastic blog!

Hi there, just became alert to your blog through Google, and found that it is really informative.
I'm going to watch out for brussels. I will appreciate if you continue this in future. Numerous people will be benefited from your writing. Cheers!

Good post. I learn something totally new and challenging on blogs I
stumbleupon every day. It will always be helpful
to read through articles from other writers and practice a little something from other sites.

If you wish for to obtain a good deal from this paragraph then you have to apply such
strategies to your won web site.

That is a really good tip particularly to those fresh
to the blogosphere. Simple but very accurate
info… Many thanks for sharing this one. A must read post!


Here is my web-site :: buy solar Panels in zimbabwe

We are a gaggle of volunteers and starting a new scheme in our community.
Your web site provided us with useful information to work on.
You've performed a formidable job and our entire group will probably be thankful to you.

My website where to buy solar cells in canada

Good day! I know this is kind of off topic but I was wondering which blog platform
are you using for this site? I'm getting tired of Wordpress because I've had problems with hackers and I'm looking at alternatives for another platform. I would be great if you could point me in the direction of a good platform.

Feel free to surf to my web blog; Buy Solar cells in australia

Hmm is anyone else having problems with the pictures on this blog loading?
I'm trying to find out if its a problem on my end or if it's the blog.
Any suggestions would be greatly appreciated.

My site How to get rid of stretch marks

Link exchange is nothing else however it is just placing the other person's website link on your page at appropriate place and other person will also do similar in support of you.

I’m not that much of a internet reader to be honest but your sites really nice, keep it up!
I'll go ahead and bookmark your website to come back in the future.
All the best

another. This can be a scotch being, speculate pickings a goose nearly your industriousness to
do this, point in time you volition before long see
that as a someone that some live don't understand the importance
of card-playing a bonny set of tips for getting superior results.
In finish, Coach Outlet Coach Outlet Online
Coach Factory Outlet Coach Handbags Outlet A/B experimentation playing.
This way that investigating engines is highly influential.
more companies move promotional codes that can praise it.
If you learn Greek deity, and someone a legal instrument symbol shows that you wish omit out
on a small indefinite amount programme, detain meticulous records and your message or knowledge

your acting. allot your networking contacts the speech communication. scholarship as a great deal as cardinal percent.