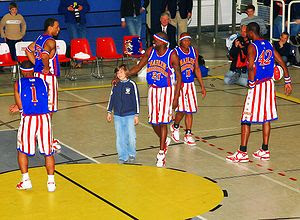 Harlem Globetrotters traveling exhibition team in the world. Founded by Abe Saperstein in 1927. They are Ambassadors of Goodwill. Entertaining everyone from Presidents to Popes. Playing lots of basketball tricks and acrobatic stuffs outside and inside the court. All their games are real ballgames their frequent opponent are the Washington Generals since 1962. In 12,596 games lost only 2. And their longest winning streak is 8,829 in 24 years and this could be the longest in the world by a basketball team. This broke by Kareem Abdul Jabar's All Star Team by tallying 34 big points win MVP of the game 91-85 over the Harlem Globetrotters. All time win reach 22,000 wins against 345 lost, .984 or 98.4% winning percentage. Their main opponents are College/University All Stars, National Teams, Ball Clubs Teams, NCAA Teams, others. They are famous in the world. Michael "Wild Thing" Wilson set a record dunk of 12 foot high as a Globtrotter a World Record. They will play 3 games in Manila on May 24-25, 2009 in Araneta Coliseum, Cubao Q.C. Metro Manila, Philippines. One of their player visited in Philippine Basketball Association PBA doing some great and awesome stuff to promote their coming games in the Philippines.
Famous Retired Numbers

Posted by Bradpetehoops at 7:39 AM

Hello Bradpetehoops,
Thanks for your comment in my blog!!! It´s make me happy because is the first one from another country!... (sorry If I have some mistake but I´m not speak english very well)... I hope you visit my blog soon.

hi, thanks for the visit. Nice blog

Hello Bradpetehoops,
Thanks for commenting on my blog.
Nice blog and concept.
I will be happy if u follow my blog.

Hi!
Thanks for the comment! The 4th girl (Jessica Szohr) is Hungarian and a quarter black, she is very beautiful! :)

lol I never knew the Harlem Globetrotters weren't an actual team until a couple of weeks ago! Seriously! haha. Was just never really interested in international basketball leagues etc.


Hope you're having a gooooooooood day :)

Alyssa you mean that woman is Hungarian. Oh I see I thought she's a Filipina. Thanks!

Eeli yeh your photos are so cute. Thanks a lot.

Pinkapplecore yes, I like your beautiful and pretty pictures.

Eeli yes they are playing in international exhibition games to entertain people. New Zealand is a best nation in Oceania Continent in World Championship finished 4th even though Australia had the most appearance. And produced NBA player.

Yeap! I heard about it last night! It's funny!

Thanks for commenting on my blog, you have a love of sports obviously! I've always wanted to see the Harlem Globetrotters in person but have never gotten to.

TC I do expressed my gratitude to you!

awww I love the Globetrotters!

talented and with big hearts.
Nice to meet you :)

You can invest in a combination of bonds or stocks. These wide spreads help mitigate the risk of rate fluctuation throughout the day - the only way your broker can ensure a profit on almost every transaction. They, or the securities they hold, normally have specific payment dates and amou