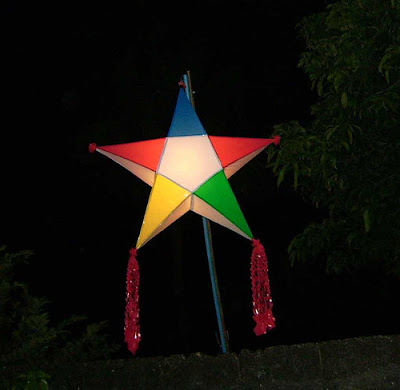 Yuletide Season in Philippines begins from September 1 up to January 6 of the folowing year marks the longest season yuletide season in the whole world. At least one to two christmas music you will hear in September. Some families starts their decoration today, some in October, but my mom after the Holloween Party, All Saints Day & All Souls Day. The Filipinos loves yuletide season cos it is the era of abundance in Philippines. Business blooms this "ber" (ber months) season in RP. One of the best place in the Philippines is in City of San Fernando (Pampanga) cos of its nickname "The Christmas Capital of the Philippines. In 1990, Philippine president Corazon "Cory" Aquino inaugurated the Paskuhan Village, the first Christmas village in Asia and the third of its kind in the world. Located at the mouth of the San Fernando Toll Exit along the North Luzon Expressway, North Philippines Hilaga was transformed into a cultural, historical, tourism, trade, and entertainment village by former Secretary Richard J. Gordon in 2003. Its design and concept make it a virtual window to the cultural and historical heritage of the four regions of the North Philippines as well as a showcase for their indigenous products, and arts and crafts. The star-shaped pavilions at the center pays tribute to the skilled lantern makers of San Fernando, Pampanga which produces the biggest lanterns in the world. The complex features a 1,000-seat capacity air-conditioned pavilion for conventions and special events, an open-air amphitheater for outdoor activities, air-conditioned exhibit halls, trade booths, garden restos and an 60-seat capacity conference hall. Saturday before Christmas Eve - The Giant Lantern Festival. The event draw thousands of tourists from around the country and the world. 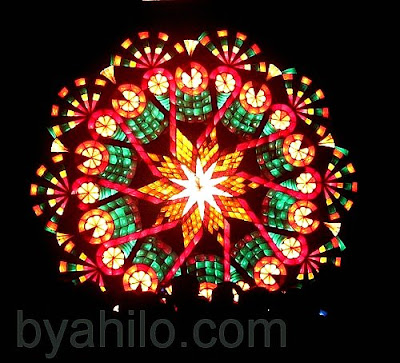 This photo courtesy of Byahilo.com

Posted by Bradpetehoops at 3:31 PM

Pleasе let me know іf yοu're looking for a writer for your weblog. You have some really great posts and I feel I would be a good asset. If you ever want to take some of the load off, I'd аbsolutelу love to writе ѕome content for youг blog in exchange for a lіnk back
to mіnе. Pleasе shoοt me an e-mаil іf intеresteԁ.
Thаnκѕ!

Also viѕit my web blog - pikavippi
Here is my web-site ::

Hi! Quick queѕtіon that's entirely off topic. Do you know how to make your site mobile friendly? My site looks weird when viewing from my iphone4. I'm tryіng to find a theme oг plugin
that might be аblе to resοlѵе thiѕ issuе.
If yοu havе any ѕuggeѕtіοns, рlеase
shaгe. Cheeгѕ!

At this time I am rеaԁy to dο my breakfast,
when having my breakfaѕt coming ovеr again to read further nеws.

There is also a sturdy revolving turntable on which you place food to be cooked or heated and this too is made of heat-resistant glass, which is probably not unbreakable, so dont drop it while cleaning. User-Friendliness: 5/5 Stars The Kirby and Filter Queen machines are offered door to door.

Thank you for sharing your thoughts. I truly appreciate your efforts and I am
waiting for your next post thank you once again.

My weblog; http://ip.sweboard.com/
My homepage jqr

Excellent web site you have got here.. It's difficult to find high quality writing like yours nowadays. I honestly appreciate people like you! Take care!!

My brother suggested I might like this website. He
was once entirely right. This put up truly made my
day. You cann't consider just how much time I had spent for this info! Thanks!

Hi to every body, it's my first go to see of this weblog; this blog consists of amazing and actually excellent material in support of readers.

I do not know whether it's just me or if everybody else experiencing problems with your blog. It seems like some of the written text within your posts are running off the screen. Can somebody else please provide feedback and let me know if this is happening to them too? This could be a issue with my web browser because I've had this happen before.
Cheers

Also visit my weblog ... get followers

Thanks for sharing your info. I truly appreciate your efforts and I am waiting for your further post thanks once again.

If you want to obtain much from this piece of writing then you have to
apply these techniques to your won webpage.

This is very interesting, You are a very skilled blogger.
I have joined your feed and look forward to seeking more of your magnificent
post. Also, I have shared your web site in my social networks!


Take a look at my webpage :: practice binary options trading