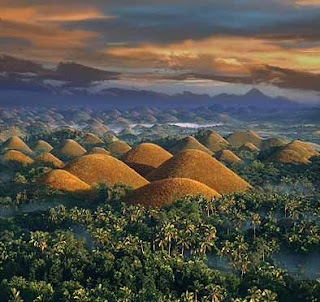 Chocolate hills in Bohol, Philippines is one of the natural wonders of the world due to unusual geological formation. There are 1,776 hills spreads over an area of 50 square kilometers. They are covered in green grass that turns brown during the dry season, hence the name. The Chocolate Hills are a famous tourist attraction of Bohol. 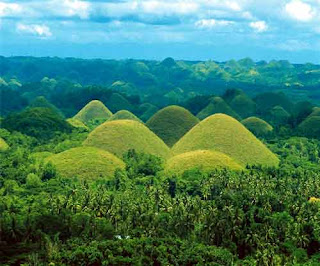 Four legends explain the formation of the Chocolate Hills.

The first tells the story of two feuding giants who hurled rocks, boulders, and sand at each other. The fighting lasted for days, and exhausted the two giants. In their exhaustion, they forgot about their feud and became friends, but when they left they forgot to clean up the mess they had made during their battle, hence the Chocolate Hills.

A more romantic legend tells of a giant named Arogo who was extremely powerful and youthful. Arogo fell in love with Aloya, who was a simple mortal. Aloya's death caused Arogo much pain and misery, and in his sorrow he could not stop crying. When his tears dried, the Chocolate Hills were formed.

The third legend tells of a town being plagued by a giant carabao, who ate all of their crops. Finally having had enough, the townsfolk took all of their spoiled food and placed it in such a way that the carabao would not miss it. Sure enough, the carabao ate it, but his stomach couldn't handle the spoiled food, so he defecated, leaving behind him a mound of feces, until he had emptied his stomach of the food. The feces then dried, forming the Chocolate Hills.

The last legend is about a gluttonous giant named Dano that eats everything in his path. One day he came to a plain. He saw a beautiful young woman named Eng. To win her affection, he needed to lose weight. So he excreted everything he ate. In the end, his fecal matter covered the land and he won Eng's affection. 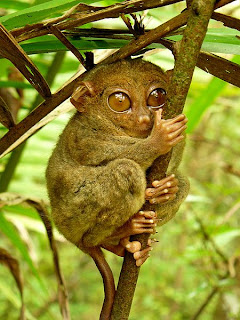 Plus the Philippine Tarsier one of the smallest primate in the world.  Come and visit Bohol! 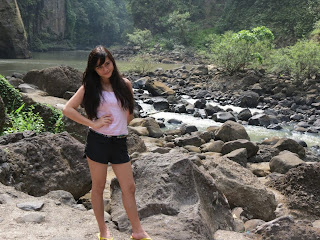 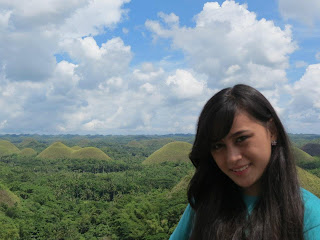 ITS MORE FUN IN THE PHILIPPINES

In NBA, the Utah Jazz haven't started 0-3 since the 1979-80 season, the franchise's first in Utah. Instead, they snapped Oklahoma City's season opening two-game win streak in Halloween night. Paul Millsap had 30 points and 16 rebounds, Deron Williams added 16 points and 15 assists and the Utah Jazz avoided matching their worst start in 31 years by beating the Oklahoma City Thunder 120-99 on Sunday night. Al Jefferson notched his first double-double since joining the Jazz in an off season trading, putting up 23 points and 10 rebounds.
Posted by Bradpetehoops at 7:18 AM