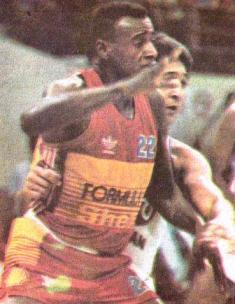 He made his Philippine Basketball Association debut with the Beermen in 1987, then he became a resident import of Shell Turbochargers. Finishing his 13-year career 8,955 points, 3,370 rebounds, 1,192 assists, 247 steals and 563 blocks in 221 ballgames. His career high season in 1989, he had 52.6 points per game in 23 outings and tallied 72 career high points vs SMB on March 5, 1989. He also normed 17.1 rebounds per game. Winning 3 championship crowns with San Miguel Beermen and Shell Turbochargers. He played with Anejo Rhum 65rs as their lone imports in 1988 PBA-IBA World Challenge Cup (4-team tournament [2 IBA teams, All-Filipino Champion & All-Filipino Battle for Third series winner]) wherein they beat two IBA teams and met Alaska Airforce with two reinforcers. But he and the Rhummaster prevailed in a cliffhanger down the wire game and clinched the championship trophy. The legendary PBA import has lost his battle with cancer. He died on March 30, 2013 at 51 years of age. A product of Memphis State University.

Awards and Achievements
The Legacy continues

Posted by Bradpetehoops at 10:55 PM