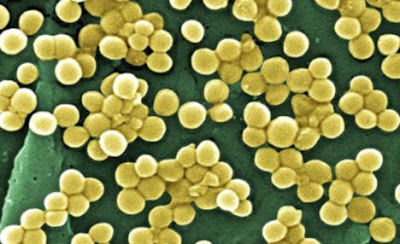 NDM-1 Superbug Gene in United Kingdom news from Dailymail.co.uk The Health Protection Agency (HPA) yesterday stepped up its warnings about the new gene called NDM-1, or New Delhi metallo-beta-lactamose after the place where it was first identified.

Rising levels of antibiotic resistance are a threat because there are few new drugs in the pipeline.

Infection experts are alarmed about the spread of multi-drug resistance facilitated by the gene NDM-1 that can easily jump from one strain of bacteria to another.

If it ends up in a bacterium which is already resistant to many other antibiotics then it could produce infections that are almost impossible to treat.

NDM-1-producing bacteria are resistant to many existing antibiotics including carbapenems - a class of drugs often reserved for emergency use and 'last resort' treatment.

So far two types of bacteria have been host to NDM-1 - the gut bug E.coli and another that can invade the lungs called Klebsiella pneumonia.

Both can lead to urinary tract infections and blood poisoning.

E.coli is among a group of 'gram-negative' bugs, and the proportion of antibiotic-resistant cases of E.coli infection has trebled since the turn of the century.

There are about 20,000 E.coli bloodstream infections each year in England, Wales and Northern Ireland, of which more than one in ten is resistant to antibiotics.

There are just two antibiotics in the pipeline against this group of infections.
This compares with several new medications for gram-positive infections like MRSA.

Figures suggest it costs between
£500 million to £1 billion to bring new drugs to market.

GSK, one of a handful of giant pharmaceutial firms actively investing in antibiotic research, said: 'New antibiotics that work in different ways to existing medicines are desperately needed to tackle the rising incidence of antibiotics resistance.'

I heard in the Philippines news also courtesy of GMA News 24 Oras. They alarm and warn the people of the Philippines regarding this spreading bacteria that are antibiotics resistance. By avoiding hand shaking (the bacteria can transfer through hand to hand) and cos then we touch our face the bacteria may enter in our eyes. Take care of ourselves. Keep ourselves and surrounding clean, eat nutritious food and drink 8-10 glasses of water. Have a great day.
Posted by Bradpetehoops at 10:18 PM

Follow our signals today and make up to 270% a day.