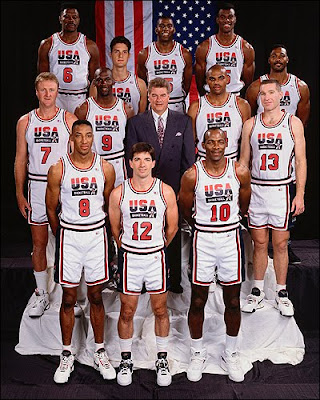 Dream Team I or the Original Dream Team is the one of best team ever assembled by any team sports in the world history. One of the most illustrous collection of talents. Blockbuster basketball team in the world. Because of this star line-up, the team's games usually featured opposing teams asking for pregame photos and autographs with their U.S. opponents—their idols. Treated like royalty by fans & opponents. Easily captured the Olympic Medal in glorious fashion. Beating the opposing teams in thirty to forty plus points. Averaging an Olympic record of 117.3 points per game & outscored opponents by 43.8 points. They are all of fame. 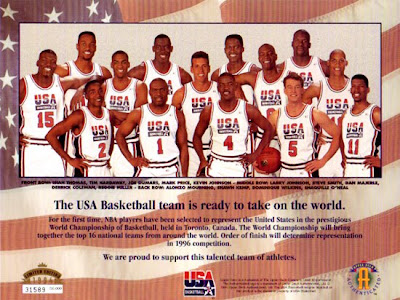 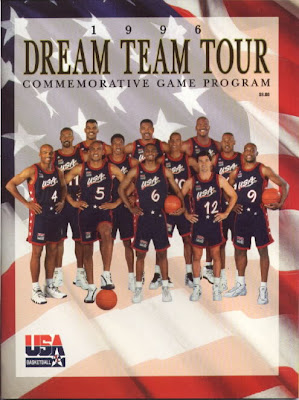 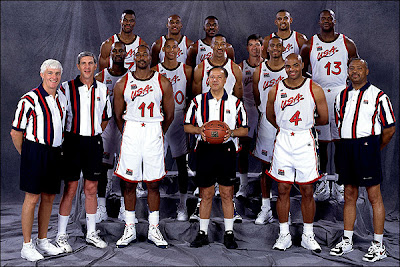 ream Team III The Americans won another gold medal with an average margin of victory of 32.3 point 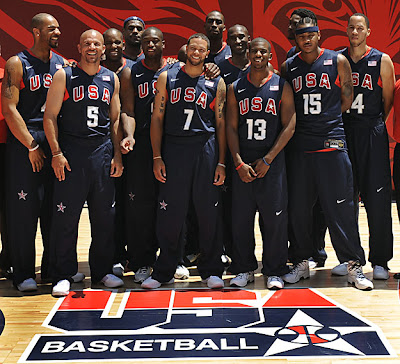 
Redeem Team The USA team easily beat their opponents in preliminary round with the margin of 32.2 points. On August 24, 2008 the United States defeated reigning World Champion Spain 118–107 to capture the Olympic gold medal led by Kobe Bryant. 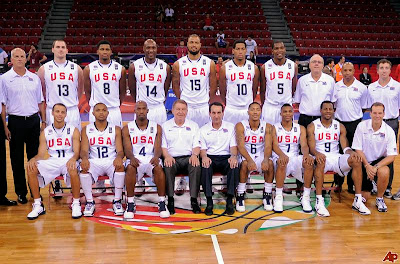 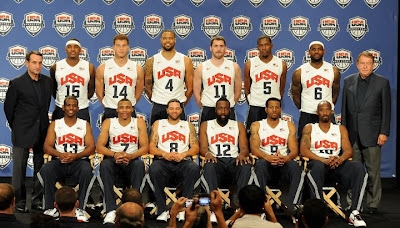 ITS MORE FUN IN THE PHILIPPINES
Posted by Bradpetehoops at 11:19 AM

2010 World Cup of Basketball Championship. USA are Powerhouse in Turkey.

2012 London Olympics the USA are still the Hoops Supremacy.

Interesting to compare each team by stats. It seems that the last dream team had a very easy road to the finals, but Spain was actually quite an uneasy opponent to deal with.
Spain got as close as 4pts on the 4th quarter where usually the US would be cruising by 10+ points.
Beside that game, how will DT3 match up against DT2 and 1.
Now that we are on to DT4 what would be the key areas to compare.
BTW I think there was another DT in athens and another one in Turkey with DRose and Durant.

Check out my blog john hagee

I'm curious to find out what blog system you are working with? I'm
experiencing some small security issues with my latest
blog and I would like to find something more risk-free.
Do you have any suggestions?

Hmm it looks like your blog ate my first comment (it was super long) so I guess I'll just sum it up what I submitted and say, I'm thoroughly
enjoying your blog. I as well am an aspiring blog writer but I'm still new to the whole thing. Do you have any helpful hints for inexperienced blog writers? I'd genuinely appreciate it.


Look at my web site http://www.pikchur.com/A6RA

Hello! Would you mind if I share your blog with my twitter group?
There's a lot of folks that I think would really enjoy your content. Please let me know. Thank you

Appreciating the hard work you put into your site and in
depth information you present. It's nice to come across a blog every once in a while that isn't the same
unwanted rehashed information. Fantastic read! I've bookmarked your site and I'm including your RSS feeds
to my Google account.

Wonderful, what a web site it is! This blog presents valuable facts to us,
keep it up.

Have a look at my homepage commercial juicers

Magnificent goods from you, man. I have take into account your stuff prior to and you're just too great. I actually like what you've acquired here, certainly like what you
are saying and the way through which you assert it. You are making
it entertaining and you continue to care for to stay it smart.
I can't wait to learn much more from you. This is actually a terrific web site.

Heya excellent website! Does running a blog similar to this take a great deal of work?

I've absolutely no understanding of computer programming however I was hoping to start my own blog in the near future. Anyways, should you have any recommendations or techniques for new blog owners please share. I understand this is off topic but I just wanted to ask. Thanks a lot!

Hi there! Someone in my Myspace group shared this site with us
so I came to give it a look. I'm definitely enjoying the information. I'm
book-marking and will be tweeting this to my followers! Wonderful blog and fantastic style and design.

I got this site from my friend who shared with me concerning this website and at the moment
this time I am visiting this site and reading very informative articles here.

Do you mind if I quote a couple of your posts as
long as I provide credit and sources back to your webpage?

My blog site is in the very same area of interest as yours and my visitors would really benefit from a lot of
the information you provide here. Please let me
know if this ok with you. Thank you!

Normally I do not learn post on blogs, however I wish to say that this write-up very forced me to check out and do it!
Your writing taste has been amazed me. Thank
you, very great post.

If you desire to take a great deal from this article
then you have to apply these methods to your won blog.

hi!,I really like your writing so much! proportion we keep
in touch more approximately your post on AOL? I need a specialist on this house to resolve my problem.

May be that is you! Taking a look forward to peer you.

When some one searches for his vital thing, therefore he/she wants to be available that in detail,
so that thing is maintained over here.

Thanks designed for sharing such a pleasant opinion, piece of
writing is pleasant, thats why i have read it entirely

Great post. I was checking continuously this blog and I'm impressed! Extremely helpful info particularly the last part :) I care for such info much. I was seeking this certain information for a long time. Thank you and best of luck.

Excellent post. Keep posting such kind of info on your page.
Im really impressed by your blog.
Hey there, You have done an excellent job. I will definitely digg it and personally recommend to my friends.
I am confident they'll be benefited from this website.

Feel free to surf to my blog phvi.ch

What's up, I log on to your new stuff on a regular basis. Your humoristic style is witty, keep up the good work!

I blog frequently and I really appreciate your content.
This article has truly peaked my interest. I will book
mark your blog and keep checking for new information
about once per week. I subscribed to your RSS
feed as well.

Here is my webpage http://wiki.unict.it/index.php/Index.php